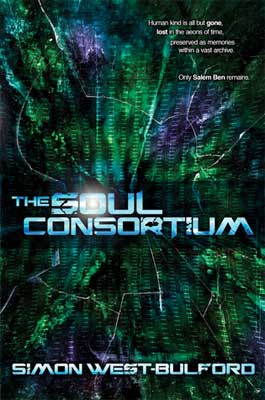 I can’t remember the last time I read a sci-fi novel (not a big genre reader in general, aside from crime fiction). Even with films and television, my sci-fi tastes always lean to character-driven stuff, like Gattaca, BSG, Children of Men, etc., where the technology is downplayed in favor of human drama. Simon West-Bulford’s The Soul Consortium straddles the two, stocked with an abundance of (very, very) distant-future tech described with such precision and detail that we rarely question its functionality, yet the story itself is as humanist as they come, exploring the nature of self, religion, fate vs. free will, morality, and even love.

At the dawn of yet another universe (each repeating those that came before), Salem Ben, the last remaining man, searches for the elusive secrets beyond death in a time when all else is known, or can be known. The Soul Consortium is a collection of data files representing the lives of every human, able to be imprinted upon his own brain as he experiences the entirety of their lives in his quest. Millions of them, over billions of years. The novel focuses on the last handful of these immersions after discovering aberrations in the data: a mysterious, sinister presence called Keitus Vieta, who may hold death’s answers. Each of these lives is a first-person series of novellas/chapters, including a 20th-century serial killer, a dark-ages medium, a detective investigating the murders of enlightened monks, and a queen responsible for neurological breakthroughs but galactic destruction. One empty space remains in the Consortium, waiting for Salem to snuff out his own life, as all have done upon acceptance of their futile existences. His companion, Qod, is but a voice, the HAL-like AI who questions Salem’s motives while controlling operations.

I had the pleasure of reading a draft of this epic novel a few years ago in a workshop with Simon. He’s a friend (who also contributed significant editorial to my own Flashover). Even back then, I marveled at the balance he struck between the visceral/emotional storytelling and his impeccable research about astronomy, theology, classical mythology, and technology (am I leaving out any –ologies?). Dude’s a scientist, after all, and a former video-game designer, skills that serve him well in his literary pursuits.

The Consortium timeline is sheer madness, spanning billions of years, some of it familiar and some otherworldly, all grounded by transitional chapters in which Salem postmortems with Qod and summarizes his findings. A healthy amount of repetition/restating helps the reader keep up with the more challenging concepts the novel posits and evolves. Its characterizations are fantastic, my favorite being Orson Roth: serial killer, wherein we experience first-hand the childhood seeds of his malevolence as well as his own fate. He, too, was a man seeking forbidden mortal knowledge in the lifeless eyes of his victims. You’ve also got potty-mouthed monks, heretical puritans, lonely deities, tortured demigods, and a whole lotta dead people being re-spawned and rendered with skin-crawling detail. Plus just enough humor and wit to keep its metaphysical weight from burying you. The Soul Consortium is easily one of the best modern debut novels I’ve read, and I thank Simon for creating this universe and expanding my sci-fi IQ. Buy the ticket, take the ride.

Gordon Highland is the author of the novels Flashover and Major Inversions, with short stories in such publications as Word Riot, Black Heart, Noir at the Bar Vol. 2, and Warmed and Bound, among others. He lives in the Kansas City area, where he makes videos by day and music by night.
View all posts by Gordon →
This entry was posted in other voices and tagged character, novel, review. Bookmark the permalink.