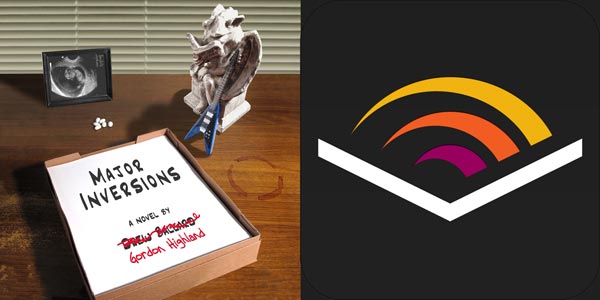 Remember my debut novel from back in 2009? Ever wanted to cut out the eyeball middlemen and have the author’s voice streaming between your ears handsfree?

Of all my fiction, Major Inversions made the most sense for an audiobook treatment because:

• it’s written in first person, so the entire narrative is “in character”
• the character’s voice is basically my own (though not his assholic persona)
• he’s a jingle writer, and I couldn’t not include those, right?
• I was between projects


While authors are the ideal interpreters of their own work, most are not skilled live readers, let alone voice actors, nor are they in possession of sound studios or the requisite production know-how. I happen to be uniquely suited to all the above, so I finally figured what the hell. Long ago, I produced books on tape as a freelancer. Yes, cassettes. Twenty-five minutes per side, because that was the average commute. I’d record the actors in a pro studio, then dump the material into my feeble home Mac for editing and mastering, Jaz drive choking all the while. Those jobs actually paid for the first incarnation of my studio that’s now mostly dedicated to musical shenanigans. And I’ve been performing voiceovers since my earliest radio days on through my present career.

The first-person point of view is what sold me. For those unfamiliar, that book featured a silver-tongued lothario whom we’d now compare to Hank Moody (Californication), though I wrote it between 2003 and 2007, influenced by Chuck Palahniuk, Nick Hornby, et al. I drew upon my personal experiences as a musician and security guard, exaggerated the hell out of them, and filtered everything through a character who’s pure id, at least at first. Of course the plot itself is total fiction. Thank Christ. And yes, I find it hilarious that iTunes has me listed under Romance.

The novel employed jingles (36 of them) as a metafictional device to reflect his inner state at certain moments—or just whatever he happened to be working on that I found amusing. They proved to be a fun challenge for the audiobook, because on the page they’re just chord names over lyrics, having put zero thought into melodies or syllable counts. Even as simply as they’re rendered here, some were real head-scratchers, these ten-second commercial breaks.

Also included is the bonus epilogue “Phenotypic Variations” (written in 2013 for my Submission Windows collection), which catches up with our hero several years later. The entire book runs a mere seven-and-a-half hours, which’ll get you through either a couple of weeks’ commutes or one manic, meth-addled day.

I produced this edition with great care over the course of a month. The sheer amount of labor involved means any future audiobooks will depend on the financial success of this one, so it’s up to you to convince me whether they’re worthwhile. I don’t personally know any other authors in my circles who’ve produced an audiobook yet, so I hope to be that literary gateway drug for you. Happy listening!

Your roommate says you should date more, that all those spandex nights on stage paying tribute to hair metal and banging faceless groupies only amplify your Jekyll/Hyde syndrome. That this quicksand town of floozies, fiends, and filmmakers will survive without your commercial jingles. And your narcotics. That you should turn in your daytime security-guard badge and settle down.

He’s got the perfect girl, a cinnamon-scented innocent who will bring that elusive substance to your life despite the familial forces that conspire against your union.

Always lurking in the periphery, the parasitic roommate remains buried in his Master’s thesis throughout your reinvention, the search for your birth parents, and your all-too-brief film scoring career. A supporting cast of lecherous directors, deluded bandmates, federal agents, and nostalgic exes enable and obstruct your path to closure and ironic revenge in this revisionist character study that is Major Inversions.

Gordon Highland is the author of the novels Flashover and Major Inversions, with short stories in such publications as Word Riot, Black Heart, Noir at the Bar Vol. 2, and Warmed and Bound, among others. He lives in the Kansas City area, where he makes videos by day and music by night.
View all posts by Gordon →
This entry was posted in multimedia, music, news, writing and tagged editing, novel, Pro Tools. Bookmark the permalink.