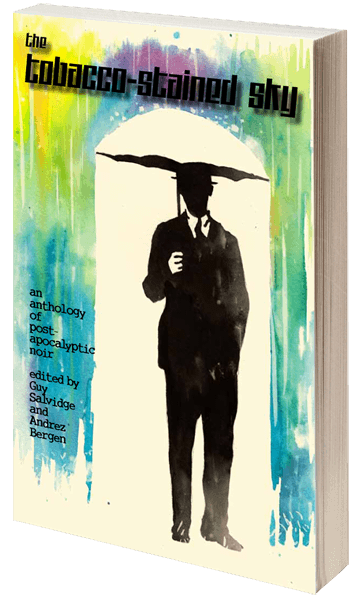 A couple of years ago, I read Andrez Bergen’s excellent post-apocalyptic sci-noir novel Tobacco-Stained Mountain Goat, and began a correspondence with the author, interviewing him for The Velvet and keeping in touch all friendly-like, as we do. A few books later, he re-approached Goat‘s publisher, Another Sky Press, about releasing an anthology of stories by other authors that he compiled (along with co-editor Guy Salvidge), all set within the well-developed universe of that first novel. I immediately jumped on board as a contributor, taking it as a challenge to write my very first story in that genre.

Here’s what you need to know. Melbourne is near-future Earth’s last city standing, where the ominous, ubiquitous Hylax (plastics) Corporation and its CEO Wolram E. Deaps are behind the push to apprehend, incarcerate, and even terminate Deviants for their behavior, enlisting Seeker Branch to police such matters. Affluent residents live in the Dome: an enclosed, city-center shopping/entertainment community that shields them from Melbourne’s post-apocalyptic atmosphere. Outside, under the ubiquitous toxic rainwater, Melbourne is inhabited by hardboiled dames, grifters, and gumshoes trying to get by. It’s Blade Runner meets The Third Man.
Short story contributors include:

In my story, “Plan E,” the Dome’s elite are known for their physical “enhancements,” so I thought a back-alley surgeon would provide a cool counterpoint-of-view to the crime focus of the original Goat. It’s also a vehicle for social commentary, while being a well-worn noir trope I could play against. I had a lot of fun devising technology and laws and playing within its existing geography, while working to keep such things in the periphery as if this were all routine. Being one who can’t resist a good twist, its framing device hit me over the head once I was nearly done, which hopefully earns a second read from a new perspective.

Get Tobacco-Stained Mountain Goat as a free e-book or $5 paperback.
Buy Andrez Bergen’s other books from Amazon.

1 Response to The Tobacco-Stained Sky