My lack of recent updates is because historically most of them have been literary, and I’m on hiatus from that world for a bit. (I will, however, be hanging in Minneapolis during AWP, eager to let you buy me drinks.) My stack of unread books grows monthly, as I’ve barely cracked a spine since last summer. But if you figure I’ve gone dormant, perish those thoughts.

Too long, I’ve been away from my first love of making original music. Sure, I created those Winebox tracks a few years ago—proudly—but the live gigs just weren’t coming. After my patience reached its tether, followed by the requisite mourning period, I returned to the woodshed (Womb With a View studio), doing the one-man-band thing under my FLASH moniker.

I began work on Finding the Light (a title based on a famous Leonard Cohen lyric) last fall, which I recall only because my Royals were in the World Series at the time. Now I figure I’m a little over halfway done, and though not usually one for pre-release hype, I’m too giddy to stay mum about it. This is a killer batch of tunes so far. Most of the lyrics you’ll recognize from my Submission Windows collection. A few I had sketched out for Winebox, but all are new recordings, and no covers. I’m writing, performing, and recording all the parts myself, DIY from top to bottom (which I’ve pretty much always done, give or take some vocals). They’re festooned with guitars, as you’d expect, but this is not an instrumental wank-fest. It’s about song power, with catchy hooks and lush arrangements alongside a few requisite face-melting riffs. Melodic rock, I guess you’d call it, somewhere between the simplicity of Winebox and the indulgence of my old FLASH stuff. There are hues of Fleetwood Mac, Pink Floyd, and ZZ Top, but diverse as the tracks are, they actually sound like they were performed by the same artist for a change. In fact, there is a bit of a pseudo-concept at work here, a loosely-assembled story.

Fall 2015 seems like a realistic street date, but time will tell. Likely download-only, though I may do a short CD run if demand is there. More info coming when release nears, so prepare thine ears and eyes for the Light! 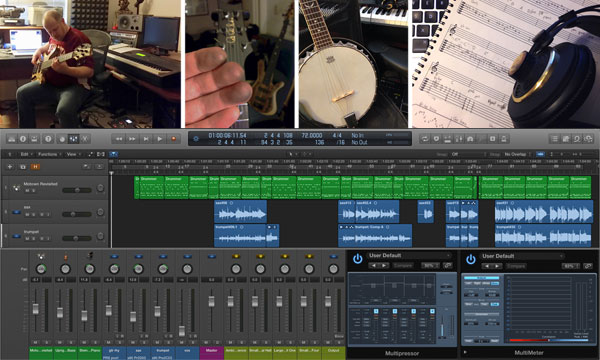 Gordon Highland is the author of the novels Flashover and Major Inversions, with short stories in such publications as Word Riot, Black Heart, Noir at the Bar Vol. 2, and Warmed and Bound, among others. He lives in the Kansas City area, where he makes videos by day and music by night.
View all posts by Gordon →
This entry was posted in music and tagged Finding the Light, music, songwriting, Winebox. Bookmark the permalink.