This anthology contains my short story “‘Burgatory” originally published at Solarcide a few years ago, but which has been offline for a while. It’s about a life-insurance salesman facing his mortality as planes of the multiverse collide. 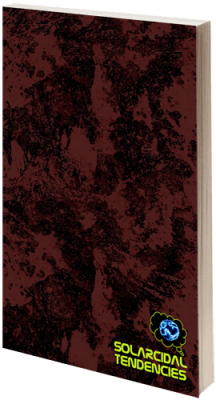 Visions, plagues, angels. A different view of the miracle of birth. Bestiality farms, departing souls, talking cold sores, and of course, elder gods. All of this and more. Edited by Martin Garrity and Nathan Pettigrew, this is a collection of some of the darkest and most peculiar words ever published by Solarcide. The long-awaited return of some of the craziest, funniest, and most brutal fiction that was featured during the first couple of years of the site’s operations. Featuring an introduction by neo-noir road warrior, Richard Thomas, and boasting stories from wonderful folk such as Ben Tanzer, Gordon Highland, Brandon Tietz, Rebecca Jones-Howe, and Garrett Cook. Wicked words are contained within.