They’re the censorial prudes who keep tits and gore off the screens at your neighborhood googolplex, right? Those philistines who exiled Antichrist to Netflix tablet-viewing under your bedcovers without even a Redbox option?

Not exactly. But also yeah.

Theater owners are the ones who’ve chosen not to exhibit anything harder-core than an R rating. While antitrust laws prohibit theaters from being owned by movie studios, agreeing to enforce their film ratings (the MPAA is comprised of the Big Six studios) is certainly one way of getting “owned.” Think about it: who stands to lose the most by you watching movies on the small screens in your home and palm? Hint: it’s the place with the seats your ass ain’t in. The Hollywood backlots will survive regardless of evolving distribution, but theaters rely on the junk their studio dealers push. So they fall in line, relegating you to the art house three counties away if you want to take your lady to see Henry & June in the company of strangers.

They’re how courts determine what’s labeled obscenity, as well as the MPAA’s criteria for rating films. It’s meant to allow for viewing in context, to evolve over time. But they’re not talking about your local community — whether populated by porn-is-the-norm Millennials, or by nunneries — rather, our national one. Ironically, the modern MPAA was created to counter local censorship boards in the 1960s whose ignorance kept quality films out of theaters. Prior to that, the infamous Hays Code (also under studio control) governed cinema, with films greenlit or redlit based on their morality. They couldn’t depict sympathetic criminals, criticize religion, or even imply sexual activity. Thus, most of them sucked.

History is littered with double-standards favoring studio pictures over indies (also hetero over homo), such as the R-rated guy jerking off into a pie versus the NC-17 lesbian diddling herself. Then there was the girl-on-girl oral in Black Swan versus the M/F kind in Blue Valentine. Though neither scene contained nudity, guess which film got the NC-17? Trick question! Not the gay one, which happened to be a Fox picture. Also, the Board isn’t supposed to suggest specific cuts to achieve a desired rating, but a litany of anecdotes suggest they often do so for their studio brethren. Nor are their ratings guidelines published, leaving filmmakers to make guesses based on precedent (despite being inadmissible during appeal). Stanley Kubrick is reported to have studied Showgirls and Basic Instinct (can you imagine?) when trimming Eyes Wide Shut’s most explicit rogerings. A few taboos are known, such as talking during sexual thrusting, or visible blood in trailers. Any drug usage or mention earns an automatic PG-13, and characters are permitted a lone “fuck” — semantically, I mean, and only as an expletive — to retain PG-13.

The full-time-gig Ratings Board is made up of a small, anonymous group of L.A. parents, whose intent is to provide guidance for other parents. Ratings also give theater owners a defense in knowing they haven’t shown objectionable material to minors. By which I of course mean the gruesome act of lovemaking and/or its attendant flashes of heinous skin. Never mind the triple-digit body count; those guys had their disemboweling coming. Be sure to slip your kid a few extra bucks for some Red Vines at concession. 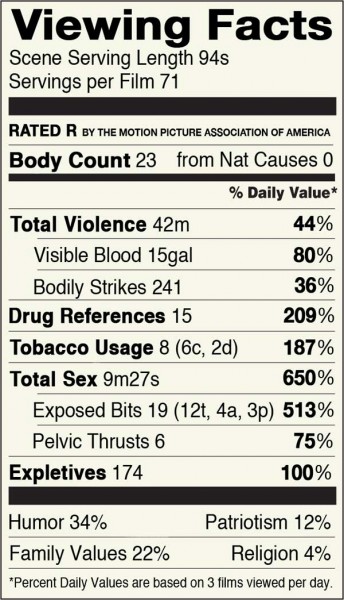 Some folks have proposed a nutrition-type label for film posters/ads to specify content. So if you’re freaked about the cool characters’ second-hand smoke wafting off the screen and into your kid’s suggestible lungs, check the fine print and don’t add it to your cart. Or if you have a penis allergy, you could avoid the full-frontal Fassbender that awaits. An excellent resource, CommonSenseMedia.org already provides such details, including suggested viewing ages by their staff, from crowdsourced parents, and kids themselves. Even the MPAA started adding “rating descriptors” of content to justify their opinions and spoil films. A few favorites:

Alice in Wonderland – “a smoking caterpillar”

We must remember that context is crucial when judging such on-screen acts. Simply counting the number of thrusts or inhales or f-bombs can’t quantify a scene’s impact. More attention needs to be focused on how the filmmakers portray their consequences. Does the stoner save the president, or total her sister’s Subaru? Will the promiscuous alien stick around to father its human-hybrid brood? Meddlesome as studio productions can be, such issues are often given more consideration up front, and might account for some of the favoritism I mentioned above. Aronofsky’s ballerinas thrashed about in a stylized fantasy sequence, while Gosling’s trip downtown was shot in minimalist fashion, possibly evoking more realistic emotion that terrified its judges. We know the Ratings Board can be more lenient when the acts have educational or historical value, just like how violence can be subjective. Watching ten zombie beheadings splatter the lens would affect most viewers less than a single slap of a redneck bride. Because we presume zombies aren’t real (at our own risk).

Hey, there’s no law; no one’s forcing studios to submit their product for a rating. Only if, y’know, they want anyone to see it. Instead, studios pass on the contractual obligation to their directors to deliver a specific rating. Often a PG-13, because that’s “the sweet spot” where the audience/money is. But evolving distribution and advertising models give unrated and NC-17 films more hope for success. Until researching this piece, I’d had no idea last year’s Killer Joe and Shame had both been tagged NC-17, because I watched them via ratings-agnostic Netflix, whom I support for that very reason. The rating itself isn’t necessarily unfair, it’s the associated stigma that limits its audience. For now.